Supported by: The Arts Council of Sweden, The Swedish Arts Grant’s Committee and The Carina Ari Memorial Foundation.
Created during residencies at The Cullberg ballet, Dansstationen Malmö and The House of Dance Stockholm.

Örjan Abrahamsson, Dagens Nyheter: “Future Memory (from 2012) is a layer- upon- layer choreography, a witty and profound dance performance which mingles with a discussion about choreographic heritage that is lively today.”

Anna Ångström, Svenska Dagbladet: “It is a gift to inherit something significant, but it can also mean a lot of pressure. You may even need to distance yourself and revolt [...]. And capture the time elapsed between the generations ... The dancer Rani Nair does all this in the solo ‘Future Memory,’ a wonderful, soul-searching, smart, funny and deeply personal act.”

Anna Lundholm, Kristianstadsbladet: “This is a show with great humor and sincerity that raises questions about ethnicity, identity and artistic creation.”

Ingela Brovik, Danstidningen: “It is as if she creates a dance’s own “In Search of Lost Time” (after Marcel Proust’s famous novel) - but, in broken modernist form, more than futurism cubism, between humor and sadness, in her own style, which is con- stantly questioning itself, mirroring inward-outward.”

What does it mean to inherit a dance? German choreographer Kurt Jooss made his last piece Dixit Dominus in 1975 as a gift for Swedish-based Indian dancer Lilavati Häger, who gave it to Rani Nair to reconstruct in 2003. Future Memory (2012) re- turns to Dixit, this time focusing not on the choreography but on the stories around it. It is a second-order performance — a performance about a performance — that uses the personal responsibilities of inheritance to move towards larger questions of history, memory, and legacy. A review from the premiere described it as combin- ing “Humor, warmth, and intellectual sharpness, all in one.” With a combination of gentleness and challenge, Future Memory embraces the possibility of an alterna- tive history, one in which a “minor” dance takes ten years of another artist’s life, and where insider and outsider are more complicated than we might think. Here both identity and dance history are understood not in terms of Indian versus Western European, but in a hybrid way that uses real and imagined archives to allow for shades of Indianness, Swedishness, and Germanness. Nair’s one-hour solo uses dance, spoken text, film, and singing in more and less spectacular forms. There are moments when audiences are invited to touch and smell. And there is a duet between a hair-dryer and a costume that was never worn in performance.

Click on this picture to see a 2 minute trailer, opens in a new window. 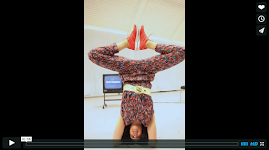